From January 1, 2021, to June 30, 2024, the BFUG Secretariat is headed by Albania. The mandate includes providing administrative and operational support to the co-chairs and working structures of the BFUG, acting as an external and internal contact point for the Bologna process, and preparing the Conference of Ministers of Education of the EHEA and the Bologna Political Forum. BFUG is also responsible for the preparation of the Bologna Process Implementation Report.

Bologna Process Implementation Report – is the main reporting document of the Bologna process.

For the work of BFUG and its substructures (Bologna Secretariat, Board, Thematic Peer Groups, Working Group, Advisory Groups and Coordination Group), between the Ministerial conferences is drawn up the BFUG Proceedings.

- full members – are 49 countries and the European Commission. To become a member of the EHEA, countries have to be a party to the European Cultural Convention and to declare their willingness to pursue and implement the objectives of the Bologna Process in their own systems of higher education.

- partners - 4 organizations wishing to be associated with the Bologna process but not included in the list of consultative participants: EAIE, EUROCADRES, Eurodoc, Euroscience. They may, if desired, take part in BFUG events and WG and CG meetings. Further technical experts, such as Eurostat, Eurostudent or Eurydice may be associated to the BFUG and invited to events upon specific request

Currently, working structures have been approved, which include 3 Thematic Peer Groups, 3 Working Groups, 1 Network of National Correspondents for Qualifications Frameworks and 1 Coordination Group.

To participate in the working structures, each country sends a request to the BFUG Secretariat.

In the period from January 1, 2021 to June 30, 2024, the BFUG Secretariat is headed by Albania. The Secretariat consists of employees of the Ministry of Education of the country - the venue for the next ministerial meeting, carries out organizational and technical work, ensuring the activities of the Groups and the Board.

The BFUG Board is an advisory committee for chairpersons and the Secretariat in preparing for BFUG meetings. The council also contacts working, advisory, and peer groups.

The current members of the Board are:

The Board meets before the BFUG meeting in one of the co-chair countries.

The BFUG Vice-Chair is the host country for the next EHEA Ministerial Conference (currently Italy). The co-chairs are the EU Presidency and the non-EU country.

The co-chair countries are responsible for promoting the goals set forth by the ministers responsible for higher education in the Bologna Declaration and the subsequent communique, and also jointly represent the interests of the EHEA at European and international meetings. 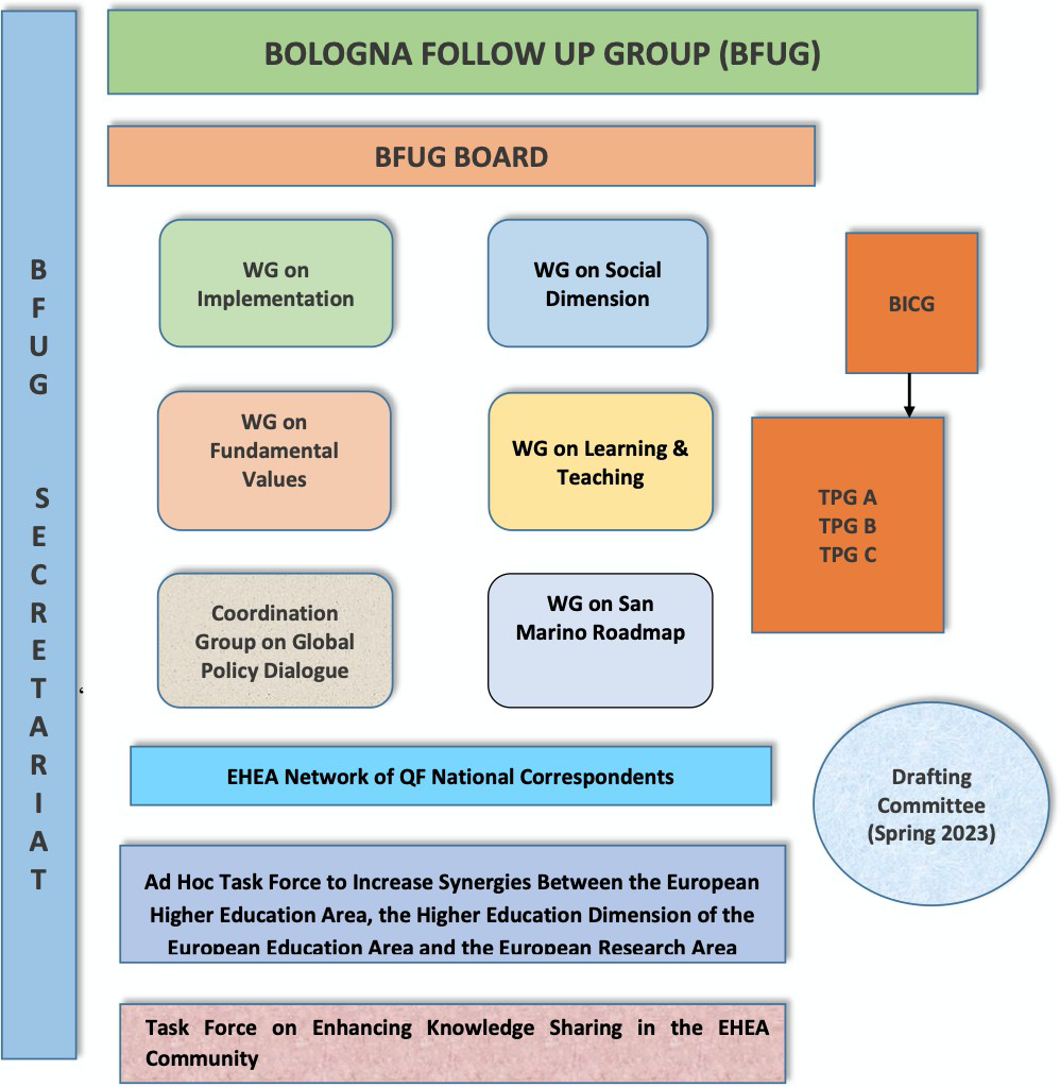